Cycling to Belgium: The Dutch Alps

It hasn't taken long for me to forget one of the cardinal rules of being on the road: don't waste the battery in your GPS/camera/phone. I had blithely taken photos and posted them on Facebook with my Samsung, and now, as I approach Aachen, I see the battery is already low. I disconnect internet and I will take fewer photos. Most important of all is the GPS, as I am not carrying a map.

In Aachen I pass through familiar territory in the city center, and I have to dismount when I find myself among a crowd outside the Elisenbrunnen. I check my GPS, note where I have to go, take a drink from my plastic bottle and cycle among traffic for twenty minutes before arriving at the Elisenbrunnen again. The crowd is different now-- younger-- teenagers are thronging after school. I stop and check my GPS again. Ah, yes, I see now. I should have made that left turn. Though I am cursing under my breath, I am relieved that I am not cycling with Lien yet, leading her in circles. That would be a bad start. 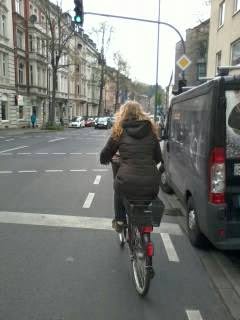 Once in Holland, in Vaals, I check my GPS again, and the map displays only the major towns and highways. Though I can still pinpoint my location, it is in a blank green field. I'll be able to head in the right general direction, but the route I take to Liege will be guesswork.

An hour later I'm in the hilly countryside at the extreme southern tip of Holland-- in the 'Dutch Alps'. I'm on a little winding road which leads, I hope, to Belgium. I take a break, marvelling at all the tourists walking around this far out in the countryside. They've come from other parts of Holland to stay at a nearby campground. In a distant field I see a bunker left from World War 2. These bunkers serve as unofficial monuments here and in Belgium, but in Germany they were long ago destroyed. In Germany they just want to forget. 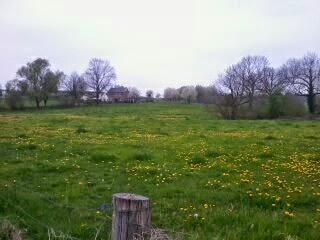 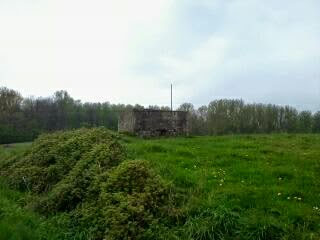 When I go on I make a surprisingly long climb and I chuckle at the idea that I am struggling to pedal my bike up hills in Holland. The view is pretty, pastoral, idyllic. Homes and farms are old and beautiful-- Middle German style. I imagine I am the only person on Earth to enjoy this scenery when two middle-aged women clad in lycra cycle past me on their road bikes.

"Is this the way to Belgium?" I shout, gasping.

The woman trailing the other nods without looking back and points ahead with a vigorous motion of her hand. Old school navigation.

I pass a lazy herd of black and white dairy cows. In the valley below there is a monastery, and its bells are ringing, it seems, just for me. There is a trampoline in front of the monastery and I imagine frocked monks silently bouncing on it in their free time. I burst out laughing at the idea. A cow turns to have a look at the source of the laughter. 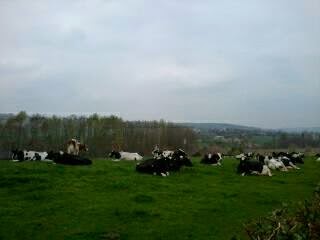 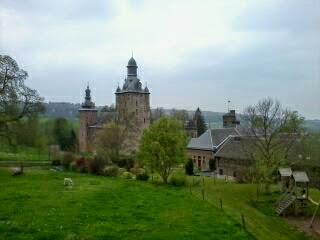 "What's up? You don't think that's funny?" I shout to the cow. The cow chews and looks away.

Fifteen minutes later, after a brief but thrilling downhill and another long uphill in low gear the road has wound around in the shape of a U and I am again looking down at the monastery but from the other side. The view isn't so pretty now, and I've forgotten the humor behind the idea of bouncing monks. I am making little progress in getting to Liege. I'm not sure where I am or whether I'm headed in the right direction. But then I remember what I've learned from the road, and I know the pressure I'm feeling to get to my destination is the pressure our civilization has taught us all to feel every day. To hell with it, I think, I'll get there when I get there, and having brought myself back to where I am I again see the beauty of my surroundings. 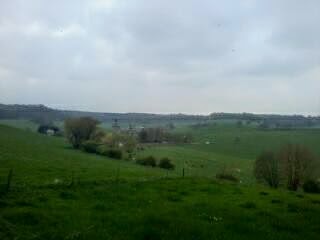 When I pass through a little village I notice the cars have the letter 'B' on their license plates. I see a street sign in French. I'm in Belgium.

After the long winding uphill country lane, the bigger road leading down towards Liege is both a relief for its ease of cycling and a chore because of increased car traffic. As I get closer to Liege the countryside becomes metropolitan muck. When I see the Golden Arches of McDonalds, I stop for a break-- not to eat, but to take advantage of the free wifi. Once my GPS is working again, I see that I'm closer to Liege than I had thought. I'll arrive within an hour, and I'll finally meet Lien, who is working with me to organize Syricipede-- our cycling fundraiser to help victims of the war in Syria.

Posted by Kenneth Schroeder at 12:10 AM

How you can donate