Cycling to Belgium: Oui, We go to Huy

Meeting Lien in Liege was like meeting an old friend. I'd gotten to our hosts first; then, as I was settling in, Lien arrived, and if there really are past lives then Lien and I had surely been pals once before. It was more like, "Hey, it's been ages!" than "Nice to meet you."

Frederique made spaghetti carbonara for dinner, and as we ate, we told Frederique and Karl our plans.

"Our goal is to reach the Mount Everest of Belgium," I said. "What's it called again, Lien?"

"Yes, and to put a flag there, my boxer shorts or something," I said.

Over dinner, however, we decided that the highest point in Belgium would be too far to reach and return again to Liege in a single day.

"Also, it's too hard," I said. "I normally only climbed mountains when I was on the road because they were in my way, not because I wanted to."

Frederique and Karl then suggested we follow the Meuse River to Huy, a city some 40 kilometers distant. As it was mainly flat going along the river, and about 80 kilometers there and back, we decided on Huy, and to save the Belgian Himalayas for another time.

We left the next day sometime around ten in the morning. Traffic in Liege was light, and before long we were cycling along the river. Lien followed. I lost my way a few times. Then Lien led and I followed. 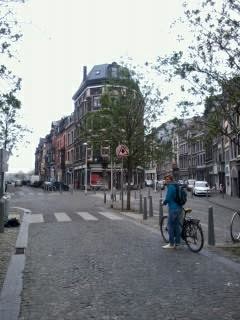 We passed a big aviary full of pigeons.

"Have you ever seen a baby pigeon?" she asked.

"That's because they're aliens, they arrive here fully grown, think about it."

I thought about it, and it seemed logical. They seem stupid, but that could be a ploy.

We cycled on, heading south, upriver. I had expected beautiful countryside. Instead, we cycled through a seemingly endless industrial zone. Neither of us complained, though.

"It's very beautiful!" I shouted as we cycled through cement dust from a cement factory.

"Yes, beautiful!" she shouted back.

Lien understood my sense of irony. 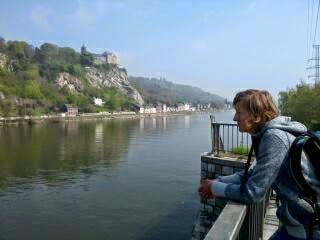 Some 20 or 30 kilometers upriver the industrial zone thinned out. We approached a small side road. On a whim, I asked, "Should we take it? We don't have to go to Huy, right? No real destination, right?"

We took the side road and made a long climb-- long for Belgium anyway. The road ended in a dirt lot.

"Okay," said Lien, and we laughed, both of us out of breath.

We decided it was a good place to take a break. There was a mound of sand nearby.

"That's it, that's the highest point in Belgium!" I said. "What's it called again?"

"Anyway, the good thing about going the wrong way uphill, is that all you have to do on a bike is coast back to go the right way."

A minute later a sports car from Holland showed up. It was a convertible with a sporty, fashionable couple in it. They had also come the wrong way. They stopped and asked Lien directions in French. She replied in French, then in Dutch. We all headed back down the hill.

Huy was an interesting town. It was picturesque but a little bit gritty too, like Belgium in general. We found a grocery store because we were hungry. I watched the bikes as Lien went inside to do the shopping. The grocery store could have been a grocery store just about anywhere in the world, but the view from the parking lot was unique. There was the river and the medieval part of the town alongside it. As I admired the scenery, a rough looking man approached and asked for money. Instead, I shared some Mars Bars I had with him and his friend. His friend had a long pony tail, and he said, "Merci" in a deep, gutteral voice with a smile. We ate our Mars Bars together in silence.

"Très bon," the guy with the pony tail croaked, after eating his Mars Bar. We nodded at each other and smiled.

When Lien came out we moved to the grass by the river, but the whole city walks its dogs to this strip of grass, it seemed, so we had to move up the river a hundred meters before we found a spot the dogs had missed. We settled down and ate and enjoyed the sun and the river and the old town along its opposite banks and the hills beyond that. 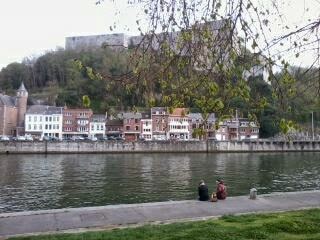 "Too bad we can't stay for a while, stop for the day," said Lien.

But we didn't have a place to stay there or tents to camp wild so we headed back before long. We wanted to get back to Frederique and Karl before it got too late anyway, because we'd promised to make them dinner. By the river we decided we'd make them a Chinese stir fry.

A few hours later we took a break. We were back in the industrial area, and the road was busy, and the only patch of grass we could find was a small one with lorries parked nearby. Nevertheless, Lien lay down on the grass and closed her eyes and this is the sign of a real traveler-- the ability to take a break anywhere, anytime, even when far from a pastoral setting.

As we approached Liege we were back on the bike path and there were lots of signs pointing the way and giving the distance.

"Are you tired yet?" she asked.

"Don't you get more tired when you read those signs?" she asked.

I stopped calling out the distance.

In Liege we stopped at a supermarket where Lien went in for the ingredients for our stir fry while I watched the bikes. Afterwards, we climbed a big hill in the city, and I wondered once again why it is that the day always seems to end with a climb.

When we arrived Lien went straight to the kitchen to start the stir fry as it was getting late.

"I'll join you in a minute," I said, but I flopped onto my bed for fifteen minutes before climbing the narrow steps of the old house to get to the kitchen. I admired Lien for being able to go straight to the cooking without taking even a little rest after an 80 kilometer day. I admired her for being able to take a minor commitment seriously. I'd seen that day that she was tough, and good natured, and reliable-- a team player. I could see her making it to Syria.

After I figured out how to cook rice in a bag, which took some time-- how much water do you need when the rice is in a bag? maybe I should take the rice out of the bag? maybe it doesn't matter how much water if it's in a bag!-- after this crisis Lien and I prepared the stir fry and we sat down with Frederique and Karl and enjoyed a nice meal with our new friends, talking about our day and everything else we could talk about in our short time together.

Posted by Kenneth Schroeder at 12:35 PM

How you can donate